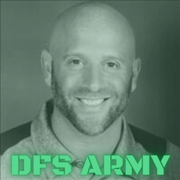 Fantasy football has become a year-round passion for many players. Long gone are the days when we picked up a fantasy magazine a few weeks prior to our draft. In order to compete, in casual leagues. We need to start tracking players and teams as soon as free agency begins in March. The 2021 free agency class is loaded with significant players that will impact your fantasy team this season. Below is a list of key players that could be on the move with the DFS ARMY predictions of where they land.

Dak Prescott
Status: UFA
Prediction: Franchise Tag, Stays in Dallas for 1 year
Comment: Dak was having a career year before his horrific injury. The Cowboys hold the cards and can franchise Dak for close to $40,000,000! They will want to see he is 100% before committing to a long term deal.

Mitch Trubisky
Status: UFA
Prediction: Signs two year deal in Denver ($7.0MM + Incentives if he starts)
Comment: Mitch will likely have to start the 2021 seas as a backup QB. His best-case scenario is signing with a team that has uncertainty at QB or drafts a rookie. Trubisky has a chance to follow the career path of  Ryan Tannehill, who many wrote off before he rehabilitated himself in Tennessee.

Comment: He is likely worth more on the open market, but Jones may take the “hometown discount.”

Comment: Though he is not the player who was drafted fourth overall a few years back, Fournette had a nice playoff run and there will be teams interested in signing him. The cardinals will jump at the chance to replace Drake for half of the cost.

Comment: Edwards is gritty between the tackles. His services will be sought by many teams, but the Ravens are too savvy to let him walk

Comment: Conner is not the fantasy star he was a couple of seasons ago when he filled in for Lev Bell in Pittsburgh. He is more of a veteran replacement value player, who has injury issues. NY Giants will want a veteran who can be paired with Barkley. Look for Conner to cap Barkleys touches per game at 20 rather than Barkley’s usual 25+

Comment: Drake was a disappointment in 2020, and certainly did not earn his 1 year $8 million dollar contract. He is still a viable veteran back, but more likely to be part of a committee in 2021. The Ravens let Ingram walk, but they will jump at the chance to replace him with a veteran.

Best of the Rest Running Backs

Jamaal Williams: Atlanta; The Falcons are likely to draft a rookie RB with a premium pick. JW makes a nice veteran  fit pair with a young player

Comment: The Texans need to make a huge splash in order to repair the damage they did with DeShawn Watson. Giving him a top 5 WR at all costs should do the trick. Watson will be the best QB that A-Rob has ever played with skyrocketing his ADP into the early second round.

Comment: Jets will open up the purse to add JJSS; his energy and ball toughness fits with new Jets coaching staff

Comment: AJ Green’s $18 MM per year salary is off the books. Fuller’s injury risk will be there, but the Bengals need to add an impact player to the offense to support Burrow.

Comment: Lions will want a few players around to help mentor young guys and give new QB Goff reliable targets

The Best of the Rest Wide Receivers

TY Hilton: Green Bay; At age 31 he has lost a step, but was productive down the stretch

AJ Green: Detroit; As the Lions rebuild they may overpay Green to mentor young players Antonio Brown: Tampa Bay; Brady’s roommate will stay as long as he is welcome

Corey Davis: Chicago; Davis is likely to get overpaid and miscast as a WR1

Curtis Samuel: Vikings; This signing would cap the upside of all the fantasy players

Comment: Henry is the best TE on the market this year. The Patriots certainly can use veterans that have a nose for the endzone

Comment: He will play as long as Brady plays, or his body gives out

The Best of the Rest Tight Ends